Hi, I'm moving to another country soon and my current project was put on hold.
Here is just a small tweak to a wireless charging pad I got for my galaxy S4. I hated the single red LED close to the USB port. It looked hidious so here is my mod: 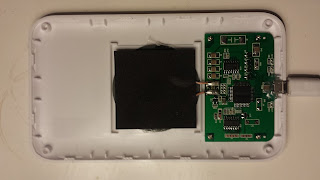 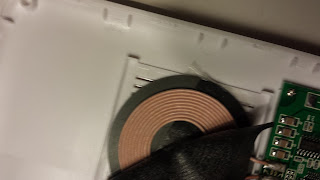 If you notice there is one 0603 size LED placed just beside the USB connector. There is also 2 LEDs unpopulated. After connecting LEDs to the other places to see what it indicates, all I got were three flashes when powered on, so I removed the original LED and used the pads on the PCB to connect a transistor. The LED is grounded by the microcontroller and the resistor is connected to the +5V so I used a generic PNP transistor. Base to the negative pad of the original LEDgoing to controller through a 1k resistor (active when low), Emitor to the ground and collector to all cathodes. Anode of the LED is going to the 5V. Secured on place with hot glue gun. 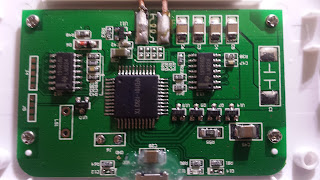 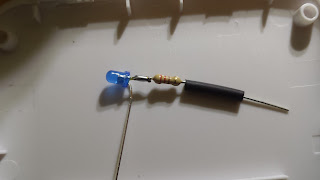 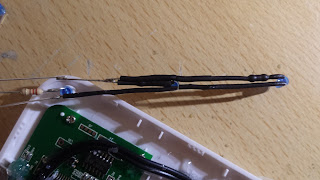 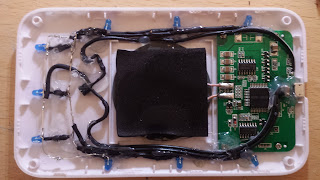 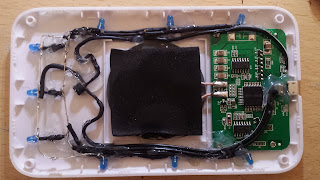 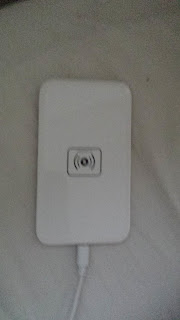 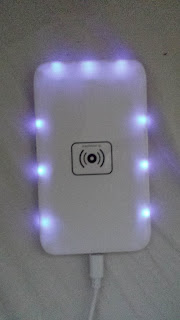 When you plug the pad to the power supply, it will flash three times (last picture was taken during them flashes), the LEDs are switched OFF. When you place your phone onto the pad, LEDs go ON until you remove the phone.
Definitely looks better than just one single red LED in the corner.
Transistor used: general PNP transistor capable of 100mA or more
Resistors: 220ohm (My LEDs had 3.2V drop @ 20mA-> (5 - 3.2 - 0.5V VCE)/220 = 6mA each x9 LEDs = 50mA (roughly)
+1 resistor between transistor and controller. I used 1k, but look into the datasheet what current your transistor need to open fully. The 0.5V VCE is voltage drop on the transistor itself - depends on the transistor used. I might hear something regarding the calculations, like voltage drop on LED at lower current will be lower ... it's not that important.
Hope you like it :)
Vystavil Jan Borsky v 13:25 Žádné komentáře:

Hi, I just posted all files needed for the digital interface for power supply. Completely forgot to add the link. Also new version of ambilight is up. For the ambilight, RaspBMC integrated support for boblight so the scripts are no longer needed.
Vystavil Jan Borsky v 5:07 Žádné komentáře:

The Audio Mixer files are up:
See http://electronprojects.blogspot.ie/p/arduino-atmega328.html

I got the mixer up and running, currently coding. All schematics, layout and code will be up soon
Vystavil Jan Borsky v 17:32 Žádné komentáře:

The pictures and description of the PSU is up. I'll upload all files later

Next project coming up soon

Hi, I didn't update my blog for almost half a year because I was working on a (for me) large project. I'm coming to the Final now. My Analog Power supply with digital interface is almost done and I'll upload all schematics, code and pictures soon. I hope you'll like it.

I'm still working on the program, but except the special functions its done (The HEX file itself is now over 40kB and has over 3000 lines of code)


BTW: after the unexpected success of the RGB clock (and a few confirmed builds of it) I plan to update it's page with more videos and pictures and add some animations to the program.


And after that I got already parts and have a design for my DIY audio mixer. The plan for that is:
7.1 audio mixer with stackable input sections for each channel, independent mapping of input to output. By that I mean that every input channel (out of the 8) can be mapped to any or multiple output channels. I need it because my computer and my TV is in different places in the room and I want the speakers to match the position of the device I'm currently working on. A2DP bluetooth will be built-in to support playing from my phone. And of course IR remote (with implemented auto-learn to support any remote - I'm sure everyone has a few buttons on the remote that aren't in use)

Hi,
The summer is almost gone and I'm moving onto another project.
Idea is: Arduino based control panel for my analogue transistor based power supply with current limiter.


Why I want it?
I built a power supply 0-30V 0-3A that serves me well for around a year, but would like to give it more of a digital touch. And its a little bit challenging. (Third project with MCU).
Hopefully I'll manage to take the best from digital & analog world :)